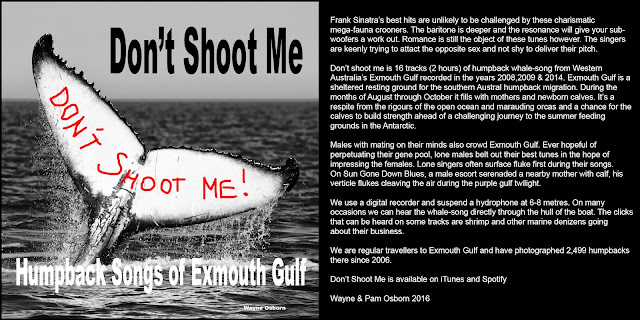 Don't Shoot Me - Humpback Songs of Exmouth Gulf is 2 hours of humpback whale song recorded in Exmouth Gulf, Western Australia by Wayne Osborn. The album is available on iTunes and Spotify. The iTunes links is https://itun.es/au/Tozleb
Posted by Wayne Osborn at 12:15 PM No comments:

Don't Shoot Me - Message to Japan

Japanese whaling, bad policy and bad science. Incredibly disappointing decision by the Japanese government to resume a program that has no scientific credibility and is to the great detriment to the reputation of an otherwise sophisticated and cultured nation. Here a minke whale makes eye contact as it surfaces next to our boat on Australia's Great Barrier Reef.
Posted by Wayne Osborn at 4:24 PM No comments: 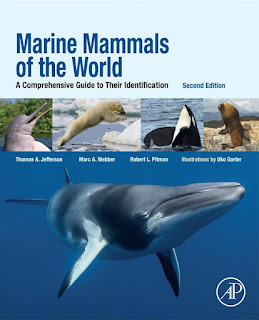 It's not the cover of Rolling Stone but getting the cover of the prestigious reference bible of Marine Mammals of the World is not all bad. This dwarf minke whale was more interested in body surfing a 35 knot swell on Australia's remote Ribbon Reefs in July 2013. Curt and Micheline Jenner's iconic Whale Song was on station and it was a world first expedition to satellite take dwarf minke whales. These guys just turn up a few weeks a year to body surf and then disappear into the great unknown. Four satellite tags helped to start unravel this mystery.  Dr Alastair Birtle and Dr Russ Andrews were the masters of ceremonies. In the rush I forgot to get a signed model release.

Posted by Wayne Osborn at 5:33 PM No comments:

It's early July on Australia's Great Barrier Reef and the SE trades are roaring fit to blow dogs off chains.

However it's in that magical six weeks when the dwarf minke whales arrive on the Ribbon Reefs in force.  Where they come from and then go to is still a mystery but Pam and I are fortunate to be with an expert scientific team on a specific world first minke mission.  They have 4 satellite tags that will track these illusive pimpernels. But first the tags need to be applied.

We are on Curt and Micheline Jenner's state of the art research vessel, WhaleSong.  Long term dwarf minke pioneers and researchers Dr. Alistair Birtles and John Rumney are aboard together with renowned telemetry expert Dr. Russ Andrews,  and the man who will do all the hard work applying the tags, Jimmy White.  The whales decide to cooperate and the tags are on in two days.  Three of the whales hung around for another two days showing off their shiny new tracking gear.

Four weeks later, the minkes are well south with the lead whale about to enter Bass Strait on Australia's southern coastline.  For more information go to www.cwr.org.au 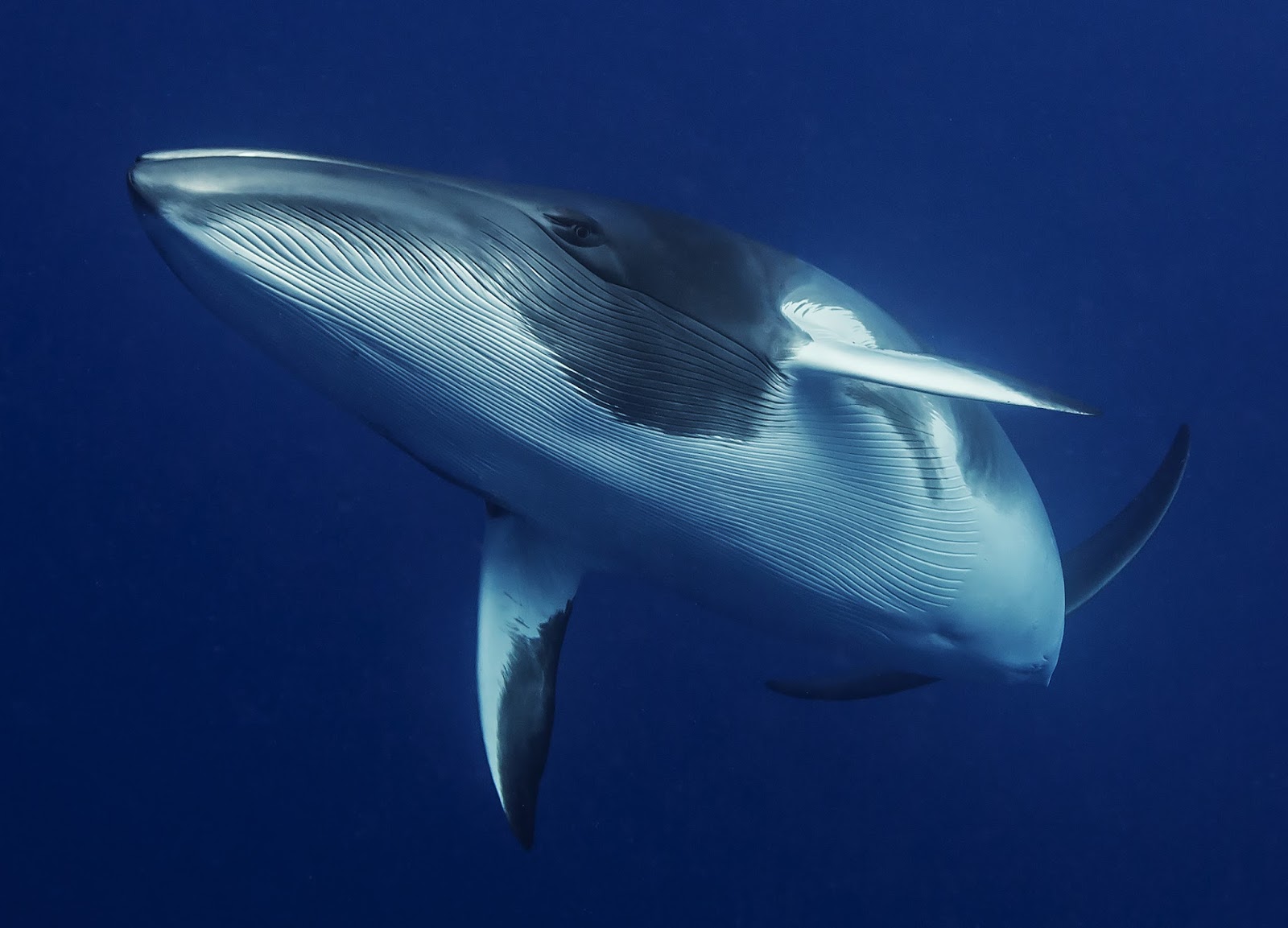 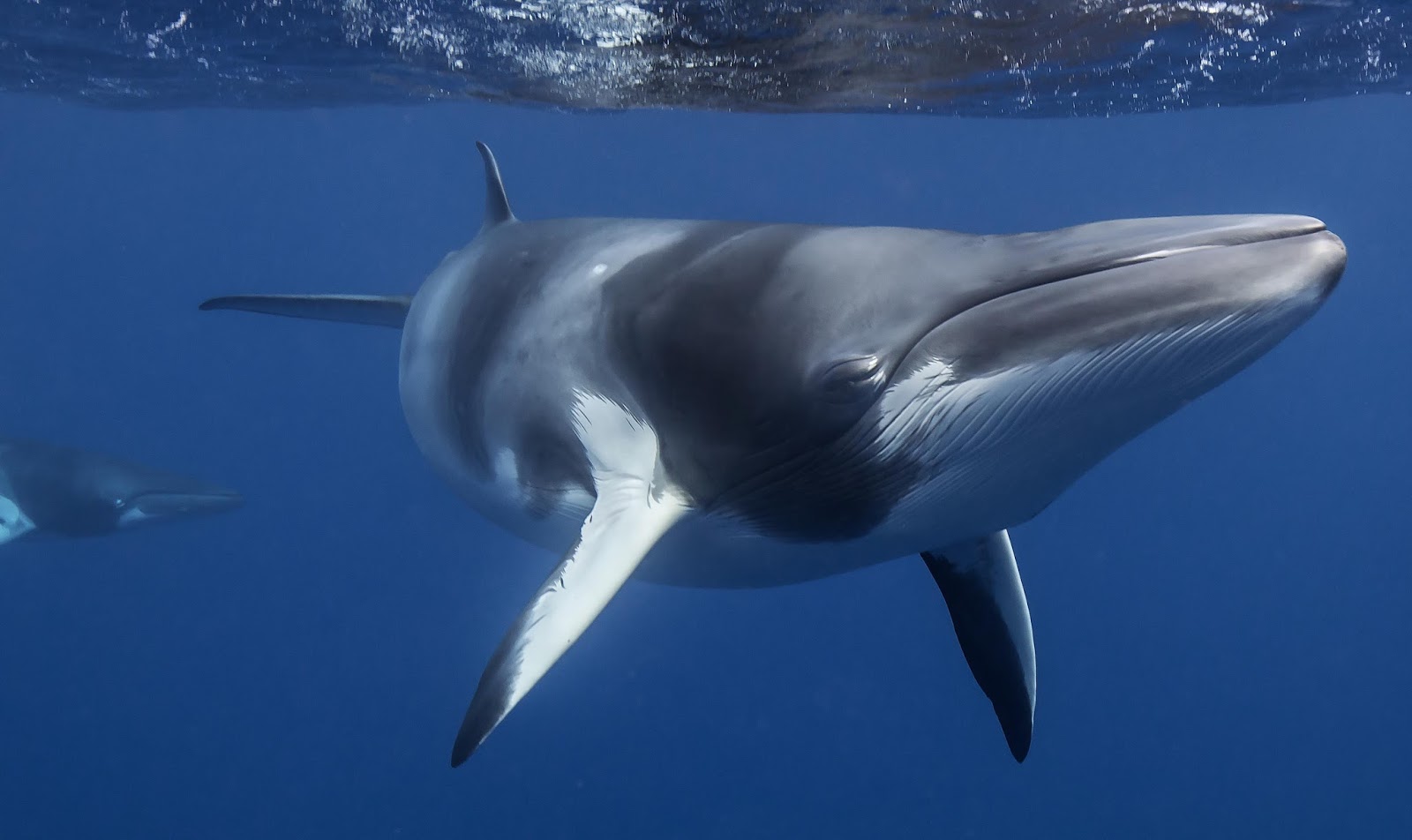 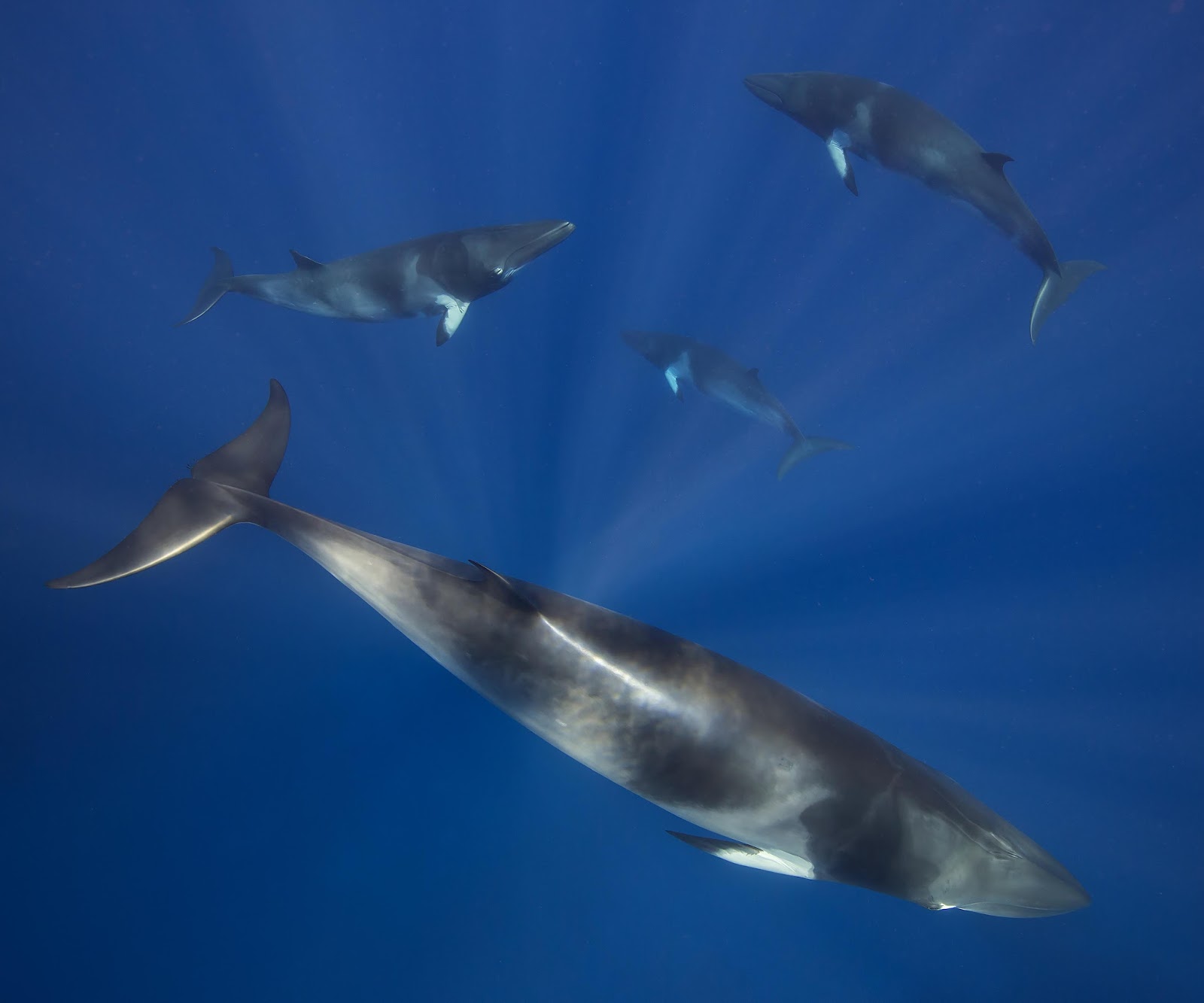 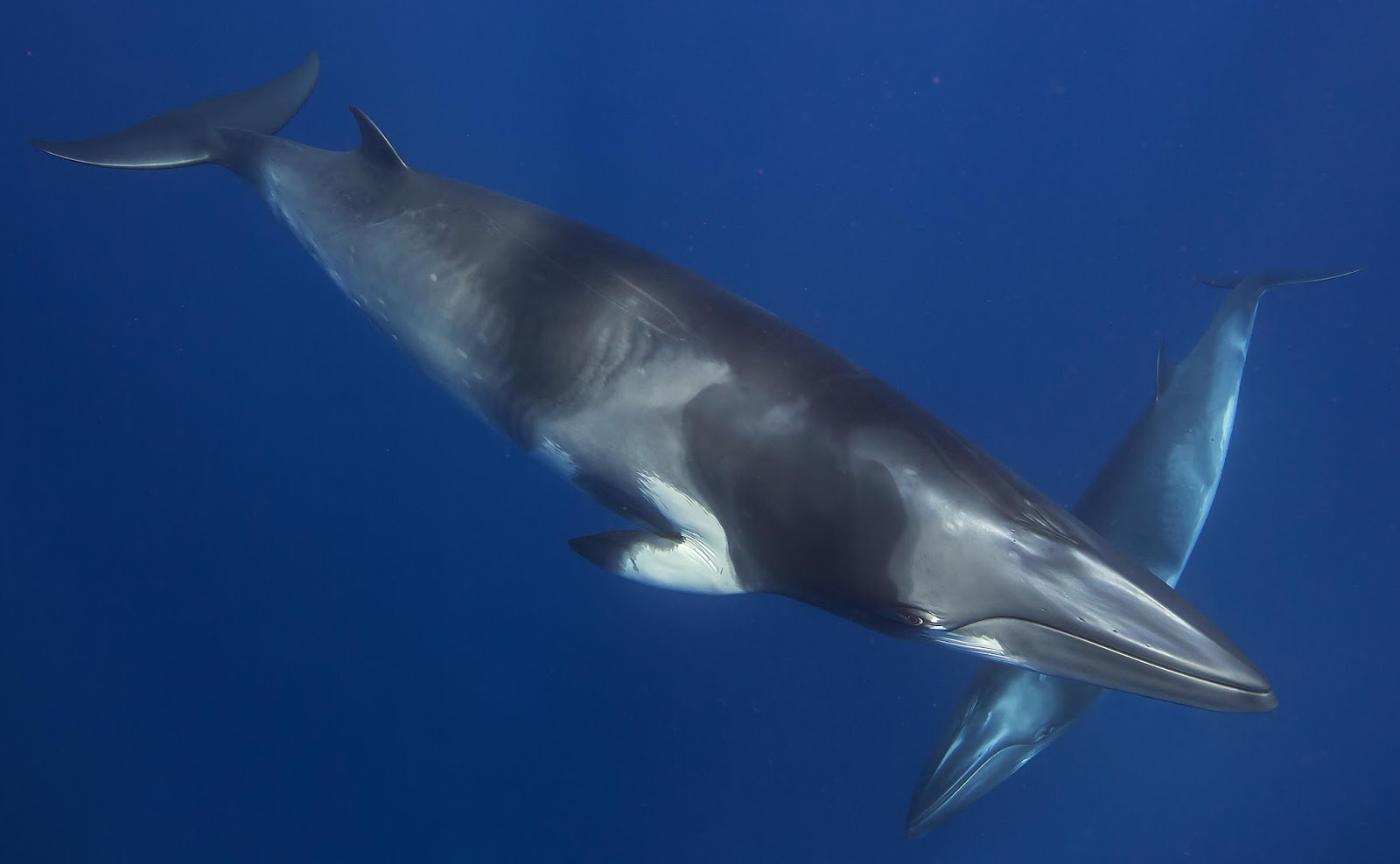 Posted by Wayne Osborn at 5:59 PM No comments: 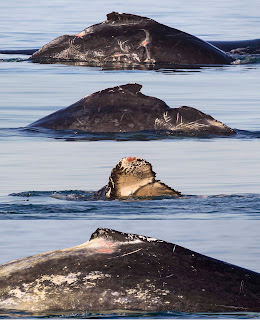 Life can be very brutal especially if you are a new born humpback whale calf.  This little guy was photographed with his/her mum in Exmouth Gulf, Western Australia a few days ago.  Within her first few weeks of life (we will assume its a girl as she is a tough survivor) she has been severely mauled by killer whales (orcas).

The extensive scars and missing blubber bear testament to a near fatal battle for this little one.  Miraculously she has survived and is beginning to heal.  The water would have been filled with blood as the pack of orcas fought to tire and drown here.  The scarring and missing flesh on her fluke show where one orca has held her whilst the others attacked.  Her mum would have been desperately engaged in the battle to save her calf.

The top two images show the calf's right and left flanks.  The third image show her damaged fluke.  The bottom image show's mum's right flank.  She appears unscathed however there is an abrasion just below her dorsal fin.

Both cow and calf were resting when photographed by Pam Osborn.  Exmouth Gulf is a shallow water resting ground for humpbacks and new season calves.  Whilst Orcas work the outside waters of Ningaloo Reef (a number of calf fatalities have been recorded there in recent years), they don't often enter the waters of the Gulf.

Posted by Wayne Osborn at 4:26 PM No comments:

As the remarkable recovery of humpback whales from, a few hundred on the Western Australian coast in the 1960's to over 30,000 today, continues new problems emerge.  On 10/11/2011 a humpback calf was hit by a pleasure boat transiting between Fremantle and Rottnest Island.  The calf sustained deep cuts to its back and was not expected to survive.  The stress to the mother - a highly intelligent and sentient mammal does not bear thinking about.  For the people on the boat, the experience would also be traumatic.

The above image is of a mother relaxing with her calf near the windmills (on the track from Fremantle to Rottnest) 8 days before the collision.  We really haven't come to grips with the explosion of whale numbers in our waters.  Pam and I have photographed over 1600 humpback whales in Western Australian waters and we see growing evidence of more frequent ship strikes.

It's time that we seriously rethink how we manage our marine activities and make our waters safer for these precious survivors from the days of commercial whaling.  Unfortunately as on the roads, speed kills.
Posted by Wayne Osborn at 7:36 PM No comments:

Posted by Wayne Osborn at 7:12 PM No comments: